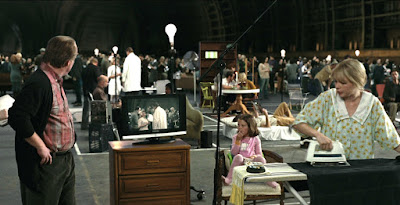 Synecdoche, New York, Charlie Kaufman’s 2008 directorial debut, is a living film that reveals the vast number of dead films that inhabit the cinema.   As Kaufman’s film evolves over the viewing experience, I could not help being struck by how many films do not regard each moment of their running time as an opportunity to become something new.  These films inhabit a cinema of death – superhero films that live and die as superhero films, gross-out comedies that live and die as gross-out comedies, prestige pictures that live and die as prestige pictures.  Kaufman’s film finds it place in the cinema of life along with the pictures of Alfred Hitchcock and David Lynch. 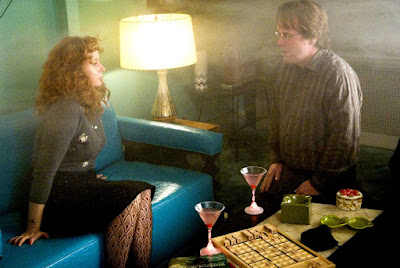 To dissect the features of these films and categorize them is an act of murder – a willful dismissal of each film as a conscious being consistently choosing how to exist as it hurtles towards its termination.   Synecdoche’s plot could be summed up simply: aging theatre director Caden Cotard (Philip Seymour Hoffman) attempts to stage a performance that is not a sliver of life but instead life-sized by creating an exact replica of New York on a soundstage populated by actors.  But such a plot summary misses the instability of space, time, and tone throughout the film.  When the film opens, it feels grounded in our world – Hoffman’s Cotard stares into the mirror as the radio speaks to him about autumn, the time of the year when we have decided what will we be and in so doing prepare to die.  But moments later, his wife Adele (Catherine Keener) checks their daughter’s poop only to reveal that it is neon green.  Perhaps, this world is like our world but heightened or exaggerated?  Minutes go by and this assessment seems to be the case until Cotard’s love interest Hazel (Samantha Morton) enters a house that is on fire, a fact that the realtor acknowledges as part of what makes its price a bargain.  Is this movie now surreal?  Who knows? Who cares? It seems emotionally appropriate, a lively decision this movie can make at this moment. 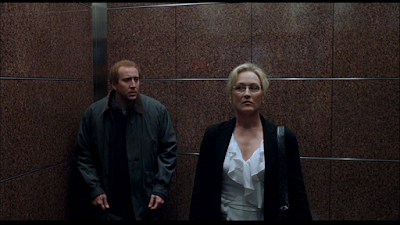 Kaufman’s earlier script Adaptation (2002) directed by Spike Jonze is an obvious comparison.  While Adaptation is more clearly meta-fictional - a film ostensibly about a fictionalized Kaufman adapting Susan Orleans’s novel The Orchid Thief, both are focused on the way that artists have permeable relationships with their work.  Certainly, much was said about this at the time of Synecdoche’s release.  However, Synecdoche and Adaptation share a stronger kinship in the way their scripts consistently morph, becoming something new at a moment’s notice.  A simple plot description of Adaptation misses the way that both the world of Kaufman and of Orlean are not stable in the film, but consistently shifting to respond to plot developments with the barrier between them even sometimes collapsing.  More astute viewers most likely notice that this adaptation is what the film’s title refers to, not the facile process by which books are chopped up, assembled into scripts and filmed.

Synecdoche, New York is a magnificent film, but it is a film that is hard to comprehend. Its willingness to continuously choose what it will be makes grasping it difficult.  One wants to pause it and think through its plots, its characters, its world, but knows that when it resumes playing, it will branch off in a new direction.  Watching it can be frustrating, but perhaps that says much about our relationship with movies, the way movies are so much lumber for us to construct assessments and build experiences rather than branching objects we can only admire as we watch them grow.
Posted by Unknown at 1:26 PM