The Rules of the Game / Code Unknown 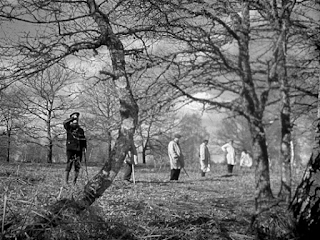 The workers move through the woods banging the trunks of trees with sticks.  The camera shows us the rabbits.  They are real rabbits; they are not digital rabbits.   They are in the center of the frame.  One sits blinking, waiting.  Another curls up into a companion. One crawls beneath the leaves and hides. The workers continue to come and the rabbits begin to run.  The camera shows us the wealthy; they are waiting with guns out.  One of the women, Christine, asks another, Jackie, if she likes hunting.  Jackie is not hunting, but she says that she enjoys hunting.  Christine holds a gun and prepares to shoot.

Then, the cast fires their real guns and the rabbits begin to die.  They are not trained rabbits.  They run, get shot, fall, and die.  The final rabbit takes perhaps four or five seconds to die.  I watch.  His tail drops from a rapid twitch to nothing.  His paw curls up towards his body until, in a final move, his legs stretch out and then retract.  I feel sad that rabbits have died so that a film can be made.  It feels senseless. 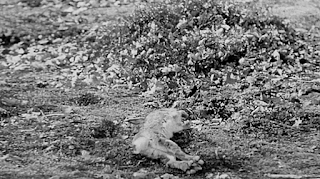 The corpses are collected.  Christine, played by the actress Nora Gregor, tells her husband that she is no longer interested in hunting.  It is not because the rabbits’ lives are meaningful.  It is because, for her, they are not meaningful.  What is meaningful for her?  I am unsure.

The director Jean Renoir is considered film’s great humanist.  We are to understand that everyone has their reasons as he tells us when he is acting as the film's character Octave.  I cannot understand Christine’s reasons.  The camera let me understand the rabbit.  It lived.  Renoir made a film.  His cast killed it and prepared it for display.  I look at the display.

A woman sits at the back of the metro with her back to the camera.  Two young Arab men get on the metro and stand across from her.  One whistles at her.  She looks up.  He asks her if she is a model.  She looks away, but he continues to talk.  He moves in front of her, forcing her to look at him and flirts aggressively with her.  He sits down next to her as if they are on a date.  The other young man watches and laughs.  She believes if she pretends for long enough that he is not real that he will go away.

But, then he asks her: “How can you be so beautiful yet so arrogant?”  It is too much.  She gets up and walks to the foreground.  The other travelers on the metro do not look at her face.  They look out the windows.  They look at their magazines.  The camera shows her face.  I watch.  I know her from earlier in the film.  Her name is Anne. 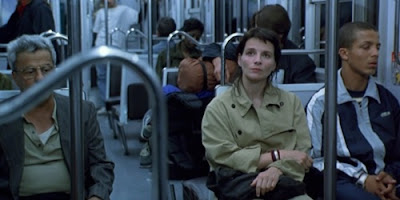 The young man approaches the foreground. No one will look at him.  I must.  His face is always in focus.  His voice is louder than all the other sounds.  When he finally turns his back to the camera, he confesses to Anne: “I’m just a little Arab looking for a little affection, like everyone else.”

She does not give it to him.  He sits down next to her quietly.  The metro stops.  As the doors open, he spits in her face.  It is real spit.  It slides down Juliette Binoche’s face.  It is too much.  But, I do not feel bad that people must be spit upon for films to be made.  It feels sensible.

The old man next to Anne trips her attacker as he flees through the door.  The attacker returns and confronts the old man.  They are both angry, but, after only a few seconds, decide to ignore each other. 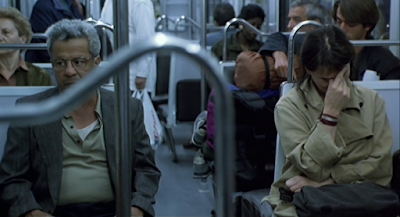 Anne wipes the spit off her face.  The metro reaches its next stop.  The attacker and his companion start to leave.  But, he gives a final scream shocking both Anne and the old man.  It is too much.  Anne begins to cry.  She thanks the old man.  He stares at the ground and says nothing.  She continues to cry.  And then there is nothing but darkness.  The scene ends mid-cry, jumps to black, and remains for half a second.

The camera has been static for the entire scene.  There have been no cuts.  The cut that ends the scene extinguishes the lives on screen.  The director Michael Haneke is film’s great anti-humanist.  We are not supposed to understand human beings; we are only supposed to see them.  No actor or human tells us this.  The camera tells us by remaining still.  It does not follow characters to find out more or cut to faces so we can see reactions.  Still, I can understand everyone’s reasons.  The camera has let me see people as they are.  They live and do not watch as others live.  Only cameras stay focused on people as they live.  They record the human beings and prepare them for display.  I watch until Michael Haneke turns the camera off.
Posted by Unknown at 12:07 PM